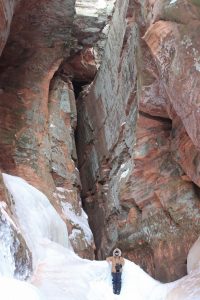 A friend and I ventured out to the ice caves this week. This the story:

Knowing that parking is the biggest adventure in the quest to see the Ice Caves just outside of Cornucopia – Meyer’s Beach, we arrived early in the morning. It was a weekday – by 9:30ish the lot was beginning to fill. (Weekends the parking lot is filled much earlier! – plan ahead if you are going.)

We embraced the -2 degree air, trekking the mile or so out to the beginning of the ice formations. Plod, squeak, tramp, tramp, tramp noises amid an occasional “hello”, nod or grunt. Serious photographers with heavy equipment were heading back to the parking lot after catching some morning quiet time with the ice caves.

On my first trip, years ago with my kids, as I was taking this photo, some guy behind me quipped “This is what Tommy looked like before the ice accident.”

Years ago the kids were all over the caves and ice formations. This particular series of cubby holes were a favorite – several kids huddled in, talking and laughing. 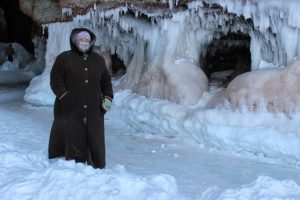 Being there was kind of like being inside of a Jan Brett storybook.

Elfish folk seemed to be lurking, waiting for an opportunity to reveal themselves.

In the distance an island, less than a mile away, was barely visible.

At the end of our trek, we were being blown by the wind. Filled with ice eye-candy, we were sated. 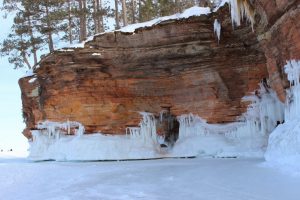 Facing the wind on the return to the “beach”, this leg of the trip seemed like work (to be honest – a LOT of work). The exit was marked by the absence of human form in the distance – we were heading where the line of people ended. I began to count my footsteps….when I made it to 100, I began again – evidence of progress.

A good day followed by a good lunch at “Coco’s” in Washburn. “Hot tea please!” and “Coco!” Phew, we were pooped!